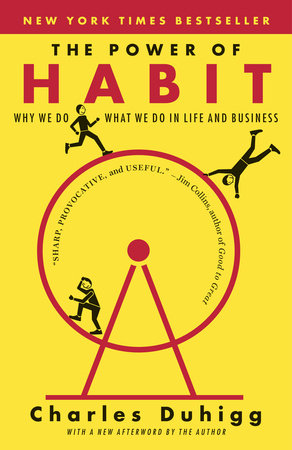 This post is based on the book, “The power of habit” by Charlies Duhigg. I actually read this book awhile ago but I haven’t written a post on it until now because it is very difficult to write a post that has less than a thousand words when the book is so compacted with information.

Anyhow, I shall try my best.

Basically, in the core of every habit, there is a cue -> routine -> and reward. Something has to happen and trigger you to do a task. In addition, we don’t want to do it unless we are getting a reward from it.

For example: You’re upset (cue), and then you start to eat (routine), then you feel better (reward).

“Often, intoxication doesn’t make the list. Alcoholics crave a drink because it offers escape, relaxation, companionship, the blunting of anxieties, and an opportunity for emotional release. They don’t necessarily crave getting drunk.”

To me, this is very interesting because I know a lot of people struggling from addiction and I always want to provide ways for them to quit. However, the golden rule of habit change is that you can’t extinguish a bad habit, you can only change it.

And how do you do that?

You have to change the routine but understand that the cue  (For example: stress) and the reward (feeling less stressed) will be the same.

So, first, you have to figure out the cue. Ex. You know that you want to drink because it makes you feel less stressed.

Now that you’re aware of what triggers your behaviour, it is easier to control.

Is there anything else that makes you feel better when you’re stressed? As long as you can find an activity that can give you the same reward (feeling less stressed), you will be able to change your habit.

Another interesting part about the book was the story about Febreze. For those of you who live in North America, you are probably familiar with the brand Febreze. Febreze is a brand of household odour eliminators manufactured by P&G.

Basically, when P&G first created this product, they thought it would be a massive success. They thought, “Wow! We have such a great product! People will buy it because they wouldn’t want their homes to stink!”

But they were wrong.

Their main focus were cat and dog owners. But they didn’t realize that while it was obvious to others their houses smelled terribly, the owners themselves were habituated to the smell and were not affected at all. They didn’t see a need to use febreze.

It wasn’t until later that P&G realized they had to position febreze as the reward (the nice smell that occurs after a cleaning routine) before the sales went up.

Instead of eliminating scents on dirty fabrics, it became an air refresher used as the finishing touch once things were already clean.

“We were looking at it all wrong. No one craves scentlessness. On the other hand, lots of people crave a nice smell after they’ve spent 30 minutes cleaning.”

Plus, who would want to admit their houses smell?

After marketing Febreze as the reward, the sales skyrocketed.

The last story is about Pepsodent (American toothpaste brand).

When Pepsodent came out, it contained citric acid as well as doses of mint oil and other chemicals that made the toothpaste taste fresh. Prior to Pepsodent, a lot of toothpaste companies tried to get into the market but failed miserably because consumers didn’t feel the need to brush their teeth.

However, Pepsodent made their toothpaste taste fresh and created a cool, tingling sensation on the tongue and gums.

As a result, customers actually notice they haven’t brushed their teeth because they would miss that cool, tingling sensation in their mouths. If it wasn’t there, their mouths didn’t feel clean.

So what’s the point in this story?

Cravings are what drive habits.

Why does it matter?

Because if you want people to use your products, buy your content, read your posts, watch your videos, you would want them to crave your stuff and incorporate it into their habits!!!!

If you can turn whatever you are doing into a “reward” for others, it will be much easier for you to gain sales/readers/viewers/so on.

Habits are extremely powerful. Supermarkets do a lot of testing and try to figure out our behaviors and actions. Apparently, studies have shown that most of us tend to turn right the moment we walk into the Supermarket. By knowing this type of information, the sellers can optimize it by creating an environment where it will most likely generate the most profit for them. (It is kind of evil but extremely brilliant).

So in conclusion, we all have good and bad habits. If you want to change a habit, you must:

1. Decide to change
2. Identify the cues and rewards that drive the habits’ routines
3. Find alternatives to replace the routines

“If you believe you can change -if you make it a habit, then change becomes real. This is the real power of habit: the insight that your habits are what you choose them to be.”

I hope you enjoyed this post! Feel free to share your thoughts with me! If you want something in depth, you should read the book yourself!

Lastly, this is a clip of me reading a blog post of mines. Feel free to listen. It’s less than 4 minutes. I apologize for reading very quickly during some parts. -_-”  Check out Faulty Logix!

This is the blog post: Don’t judge a person by the cover

One thought on “The Power of Habit”