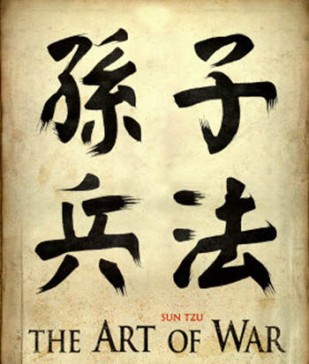 The Art of War

Yesterday, I was on amazon.ca browsing through books. I happened to come across “The Art of War”. I’ve always heard a lot of great things about the book, so I decided to give it a try. I noticed it was free to read on kindle, so I downloaded a copy and read it on my laptop (I’m not sure why it’s free, but yay for free stuff!! :D). But since it was relatively short, it’s probably not the full version. However, I thought it was rather powerful so I wanted to share some of my interpretations with my readers.

In this post, I’ve only chosen 5 quotes from the book that resonated a lot with me. If you like what you read, head on to download the free copy on amazon and read it yourself!

Now in order to kill the enemy, our men must be roused to anger; that there may be advantage from defeating the enemy, they must have their rewards.

There must be a purpose for your men. Why would they risk their lives for their country unless they feel threatened? It is crucial to drive emotions into them. If they don’t see any benefits of their sacrifices, they are not going to fight. Fear and anger are powerful forces. As my ex-student Johnson says, “They took everything, and they’ll do it again.” (His slogan for his propaganda poster). You need a strong purpose to carry on.

Oftentimes, we may believe that in order to win a war, we must fight. The more men, weapons, machinery we have, the more superior we are. But, your goal shouldn’t be to use up all your resources. Instead, aim to win your battle with ease. If you’re able to crush your opponents without fighting, you are truly skilled.

Don’t reveal all your hands. If your opponent doesn’t know where you plan to attack, they will have men dispersed to cover every corner. As a result, they will be much weaker than if they were to gather all their men in one area. You must be unpredictable if you want to win.

Throw your soldiers into positions whence there is no escape, and they will prefer death to flight. If they will face death, there is nothing they may not achieve. Officers and men alike will put forth their uttermost strength.

When you put your men in a situation where they cannot turn back, they will fight to the very end. If they think they’re going to die anyway, they will make the most out of their abilities and time. If there is no tomorrow, you might as well enjoy today.

If it is to your advantage, make a forward move; if not, stay where you are.

Sometimes, we may think we always have to be on the move or else we would be losing out. But if it doesn’t benefit you, it may be better to stay where you are and see. Figure out what benefits you and take action towards that direction.

I hope you like my interpretations. There is a lot of meaning and wisdom beneath these words. I hope you found it relatable, helpful, or inspirational. You can apply these lessons to life, business, and love as well. Thanks for reading!

6 thoughts on “The Art of War”