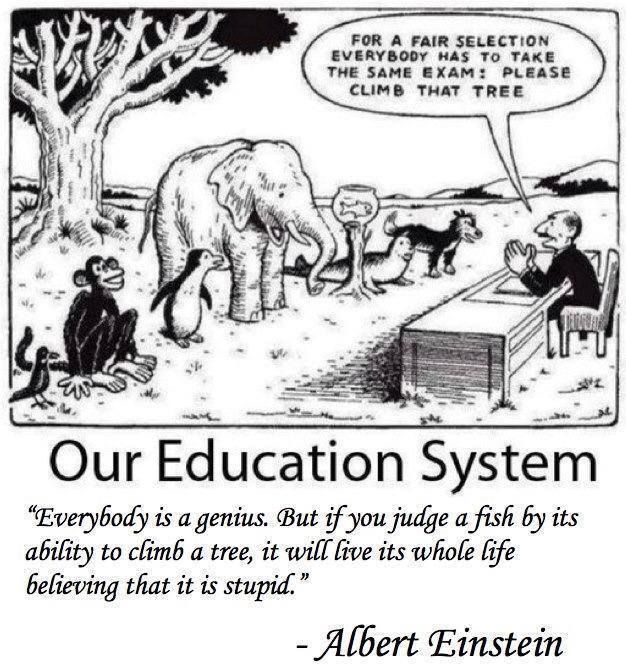 This picture basically sums up why I hate our education system. However, compared to many Asian countries, Canada is already quite lax and accommodating to their students. In my opinion, though, it is not enough.

At the end of the day, there is still a curriculum we have to follow. Kids are still forced to learn certain subjects/things whether they like it or not.

In my opinion, school is important to a certain degree -learning how to read and write, basic mathematics, working together in groups, and so on. HOWEVER, I feel like the majority of the things we learn in school are irrelevant and useless to our lives once we get into the “real world”.

In addition, just because a child does poorly in school, it doesn’t mean he/she is stupid. Perhaps, he/she simply doesn’t care? The topic doesn’t interest him or her? It’s boring?

Or what if the child is just more hands on? Perhaps he/she may not be able to write down clear instructions on how to build a table, but can actually build one? What is more important?

I feel like those who are good in school = they are able to comprehend and retain a lot of information.

It is important to be able to comprehend and retain information, but that’s just one aspect of life. I hate how most people and companies mainly judge you by the papers you have.

END_OF_DOCUMENT_TOKEN_TO_BE_REPLACED

I hope you enjoy this chapter. I think I did a pretty good job on this one. *sigh* I want donations because I am broke, but I don’t have a big enough audience to want to donate to me. It really sucks. But then I remind myself, compared to all the other translators, what have I done? Those translators upload daily and they’ve already translated 200 or 300+ chapters, while I’ve only completed 30+ AND I take forever. You get what you work for. *sigh* (I’m trying to comfort myself, lol)

This is the chapter in Chinese

The scene on ba gua stage became very difficult to control. Of course, Zhang Men and the zhang lao in charge weren’t just watching. When Xuan Luo was about to make his last punch, the zhang lao in charge’s eyebrows furrowed. But what he didn’t realize was that the punch would have directly landed on Zhan Feng Hua’s core; shattering it.

This situation plus all the conflicts from the years between the two Palaces erupted everyone to fight. Swords had no eyes (idiom: It means that when fighting, the sword cannot tell who is friend or foe; so a lot of innocent people could get hurt, I think). Chun Yang Palace and Zi Yang Palace were now fighting amongst each other. They were totally neglecting Zheng Men, who was on stage now.

“Everyone, stop!” The zhang lao in charge shrieked. The scene looked like a chaotic market place. At once, everyone was silent.

After a few moments later, finally someone snapped out of it. Chun Yang Palace’s Wu Di looked directly at the zhang lao in charge and angrily fumed, “Zhang Lao, Zhan shi xiong’s core has… has been shattered by him. How is he going to live from now on?!!”