First of all, I want to thank Alex Talbot and Jeobany Acosta for their generous donations! It really means so much to me. I have spent so many hours on translating that sometimes I don’t even think it’s even worth it. But when I receive donations, it really does motivate me and make me feel appreciated

Secondly, this chapter was so confusing to translate. You will see my frustrations as you read it. Haha. But it’s actually getting very exciting. :p

Thirdly, I’m going to try to translate three chapters a week. I don’t know if I will be able to do it because I dread it so much, but I will try a bit harder because I know it sucks to wait and I want to be faster too. (IT IS SO HARD THOUGH). NOTE: I WILL TRY. NO GUARANTEES

This is the chapter in Chinese

Tian Yu Zi and Wu Ya Zi’s ridiculous battle made the competition much more entertaining. As a result, a bunch of disciples were already talking amongst themselves.

Zhang Men helplessly smiled as the zhang lao in charge continued to try to get in between the two elders. Those two usually never caused others to worry.

As he thought about it, Zhang Men showed signs of regret and hopelessness between his brows.

“Master…I heard something fun is happening here!” Out of nowhere, out jumped a lady. She came across as extremely perky and lively, as she directly lingered around the zhang lao in charge.

That lady is Zi Yan; she was the one who refused to let Xuan Luo go once upon a time. If Xuan Luo saw her, he would recognize her immediately. If Zi Yan were to ever catch him entering the female territory by mistake again, that would probably be the end of him.

Soon after, Zi Yan saw Tian Yu Zi and Wu Ya Zi still continuing their ridiculous fight on the side. She instantaneously grinned and cheered, “Wonderful! Awesome! Beat him! Beat him!”

Zi Yan was hyper as she watched Tian Yu Zi and Wu Ya Zi. This was a moment when everything was about to turn into a great mess. How could she miss out on such a fun scene? Zi Yan clapped her hands excitedly as she watched the two elders battle.

“Stop with the nonsense!” Seeing Zi Yan act this way, the zhang lao in charge crinkled his brows and showed signs of frustration through his voice.

The harsh tone was immediately effective. Zi Yan instantly sobered up. She wanted to think of an explanation, but noticed that the zhang lao in charge’s sight was on the ba gua stage; where Xuan Luo and Zhan Feng Hua were standing (Okay, this is so confusing. I thought Tian Yu Zi and Wu Ya Zi were on the ba gua stage…what the hell…so I assumed the elders flew back onto their platform? Omg, author -_-“)

Zi Yan was curious, so her gazed followed zhang lao’s direction. As she looked at the stage, she noticed the pervert from that day years ago -Xuan Luo.

Zi Yan’s mouth twitched. She angrily shouted, “Why is it the pervert?”

Originally, she was very restless. But since it was Xuan Luo the pervert, she lost all interest. She looked elsewhere and something else seemed to have caught her attention. With a blink of an eye, she was nowhere to be seen.

Of course, Xuan Luo was unaware of any of this. Currently, his eyes were only on Zhan Feng Hua. It was a well known fact that Zi Yang Palace had few disciples. The only ones who could compete in this competition were Xuan Yuan Duan Ai, Tang Chen, and himself. But right now, there were no one else left. If he loses, then the single-elimination battle would be over.

Although there was still the group battle, the group battle only had two rounds. Remember, Xuan Luo, Xuan Yuan Duan Ai and Tang Chen only created their group three days ago. Although within three days, they have bonded very well; but regardless, three days was still quite short. Not only did a group rely on their fighting abilities, how well their hearts were linked together also play a strong factor when it came to victory.

The lack of time they had spent together already puts them at a disadvantage.

Thus, no matter what, Xuan Luo must win the next two battles! (Wu Di was eliminated, but there was still Zhan Feng Hua and one other guy).

Xuan Luo glared at Zhan Feng Hua; his fighting aura was strong. However, he was very cautious because he wasn’t sure how much strength Zhan Feng Hua had left. Therefore, he had no choice but to be wary. This may be his last chance.

Earlier, Xuan Luo wasn’t aware of all the rules. That was why he didn’t go on stage in advance. Within three days, as long as you were being sincere and honest with each other, being friends was quite easy. At least within these three days of bondage, Xuan Luo, Xuan Yuan Duan Ai and Tang Chen got to understand each other better. Of course, there were still some secrets they have not revealed to each other (Okay, in my opinion, this paragraph is totally useless. I would have eliminated the whole thing but it makes me an irresponsible translator so I just translated it anyway. It doesn’t even flow and I think the author just wanted to fill up space -_-).

As for Xuan Yuan Duan Ai and Tang Chen, they were quite impressed with their shi di (Xuan Luo). Xuan Luo had only been with Wu Dang for two years, so they find his abilities quite unbelievable. They tried their best to pave the road for Xuan Luo by using up most of the opponent’s strengths.

Tang Chen had fought with Xuan Luo once. He knew Xuan Luo cannot cultivate nei li (lol, but he can!? Tang Chen, you suck). However, Xuan Luo had a strange body spell; even he cannot figure out where it was from. Regardless, he was still not too confident about Xuan Luo’s abilities.

As Xuan Yuan Duan Ai and Tang Chen watched from below the stage, they subconsciously started to shake in fear and excitement.

The two of them exchanged glances. Then, Xuan Yuan Duan Ai hesitantly whispered to Tang Chen, “Xuan Luo should win this round, right?”

Tang Chen frowned. “Zhan Feng Hua’s nei li is very strong. In Chun Yang Palace, he is one of the best. Earlier when I battled with him using my spirit, I experienced his powers. But because of our battle, I have also used up quite a lot of his energy. Let’s hope Xuan Luo can take advantage of this.”

Once again, Xuan Yuan Duan Ai and Tang Chen put all their focus back on the ba gua stage.

Zhan Feng Hua did not move. His battle with Tang Chen definitely used up a lot of his mental energy. As a result, he was not moving. If his enemy remained still, he shall remain still. If the enemy moved, he will move. This was a well known quote in a battle. Both Xuan Luo and Zhan Feng Hua were feeling the same way..

The audience was confused. Earlier, many disciples were unable to see the battles of the spirit. Now, they were wondering if it was happening again? It seemed outrageous that the two were only staring at each other.

“Hey..is Xuan Luo and Zhan Feng Hua…” Xuan Yuan Duan Ai’s abilities were not advanced enough; hence he cannot tell if there was a battle of the spirits going on. He turned his head and asked Tang Chen.

“No, they haven’t started battling yet. Currently, no spirits have been moved…” Suddenly, Tang Chen creased his brows and yelped, “Oh no! I totally forgot to tell Xuan Luo something extremely important. Oh my goodness, at this rate, my earlier efforts will be put in vain….”

Tang Chen deeply sighed. Right now, only regret could be seen on his face.

Suddenly, Zhan Feng Hua moved. He no longer had the patience to wait with Xuan Luo. During this period of time, he had already restored a lot of his nei li; that was one thing Xuan Luo didn’t expect.

Right now, Zhan Feng Hua was heading straight for Xuan Luo. He hooked his wrist and immediately aimed for Xuan Luo’s tai yang xue (aka the temple in English). At the same time, his sight kept changing; as if he was trying to predict Xuan Luo’s next moves. 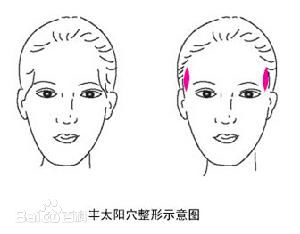 (lol I found a pic of the tai yang xue so it’s easier for you to picture. It’s the pink area)

But Xuan Luo was still standing still as Zhan Feng Hua’s attack was about to land on him.

The tai yang xue was one of the body’s lethal point. If it experienced trauma, it could lead to death or disability.

But this competition was between the two palaces. Both palaces were part of Wu Dang. Will Zhang Men and the zhang lao in charge allow this to happen?

The answer wasn’t clear. Although it was under special circumstances, disciples getting hurt from competitions were common. Right now, there were so many zhang lao watching. Will Zhang Feng Hua really use a fatal attack on Xuan Luo?