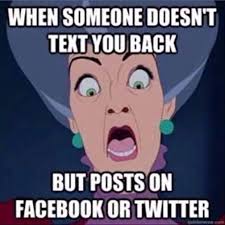 Have you ever messaged a woman and wondered why she doesn’t message you back?

In the past, I had always thought it was common courtesy to respond to anyone who had messaged me. However, after using my first dating app (Unveil), I’ve came to an understanding as to why some women do not return messages.

(Note: The app uses your voice instead of text, but it’s the same concepts)

After using the application for a few months, I have identified many reasons why women may not respond. Here are ten reasons:

1. She wasn’t serious all along

Some people sign up for dating apps due to boredom or curiosity. She may not have any intentions of meeting anyone. Sometimes, she just wants to know how many people she could match with.

Initially, I downloaded unveil so I could write a review on it. Now, I use it for research purposes.

If you sound too serious early on, you can scare her away. For example, once a guy messaged me and told me his entire life story the first time we exchanged messages. I was wondering, “Why is he telling me so much personal information? I barely even know him!”

Don’t invest so much emotion into someone unless she has shown a bit of interest.

If you make it seem like she’s your only option, she will be turned off. Don’t always be the first one to message her. Allow her to respond or initiate. If you’re constantly trying to get her attention, she will think you’re super needy and will most likely find you less attractive.

4. She is just not interested and doesn’t want to lead you on

She might not be responding because she thinks there is no point. She might want to reject you but decides being unresponsive is the easiest way. Perhaps, she wants to let you down lightly.

5. She has changed her mind

If she had given you her number initially but then never responded back, most likely, she has changed her mind and decided she isn’t interested enough to continue.

You bullshit too much. For example, “You’re the most beautiful girl I have ever seen. I think God created us so that we can be together.”

If you are saying those kind of stuff, she’s probably going to automatically eliminate you. Obviously, there are exceptions. If she is already attracted to you, she might consider that as funny/cute. But I would highly advise you not to exaggerate so much until you get to know her on a deeper level.

7. You talk too much or give her too much attention

You should mirror her responses. If she is only saying a few words, don’t write her an essay. If you’re constantly messaging her and her responses are just a few words, she is not interested. Stop talking so much and see if she ever tries to continue the conversation.

Unless she asks, do not send her a dick pic or ask for nudes. If you make her uncomfortable, she is probably not going to respond. It’s common sense.

9. You’re the same as everyone else

Guys, women get a lot of attention. If she’s on a dating app, she probably gets hundreds of messages. If you’re asking the same questions or saying the same things as all the other guys, she would be less likely to respond to you. You’re too predictable!

Plus, what’s the difference between your “hey” vs all the other guys?

10. You’re not the only guy she is talking to

In this modern age, most people are usually talking to more than one person at a time. It is not surprising for men or women to be seeing multiple people until they have decided to become exclusive.

In order to get a response, she has to be more excited to talk to you than the others or she will simply stop responding.

That’s all for now! Currently, I have written a short ebook guide in regards to texting. I will be sharing with my readers 22 reasons why she doesn’t message you back, 5 ways to improve your chances of getting a response, what not to do, weak texts vs strong texts, your goal in texting, as well as some real life examples of SSI texts.

All this information is available for only $2!!! 🙂

If you do not know what SSI texts mean, read 3 helpful dating tips for men (and women!)

Dating has really changed from what it used to be. Twenty years ago, texting wasn’t even a thing. Now, if you can’t text, you’re almost doomed in the dating world!

My ebook guide will aim to help you gain a deeper understanding of how most women think and increase your chances of getting the ladies through texting!

P.S. If you’re a reader of my translations, I’ll be posting chapter 6 and 7 in a few hours. I’m just doing some final editing at the moment. I know you guys are suffering! Don’t worry, Grace is here to save the day! LOL