I debated a long time whether I should write this post. This is a continuation of my previous post, “My dating experience on Hinge.” If you haven’t read that yet, you should read it first before proceeding.

Everything I’m about to say were my honest thoughts –what I was thinking at the time, and how I felt about it.

Disclaimer: While I was chatting with all of them simultaneously, by no means was I trying to “play around” with other people’s emotions. I genuinely spent a lot of time trying to get to know each of them.

I started talking to A because he read my blog. Because of his comment to one of my prompts, I knew he took the time to read my post. At the time, my latest post was 30,000 days, and it was about how most people only have 30,000 days on Earth.

Personally, if a guy actually takes the time to read my blog, I’m almost guaranteed to respond and chat. I really like how they would take the time to try to get to know me beyond the physical aspect.

Anyhow, I soon found out A was intense. This guy likes doing so many physical activities. At the time, he was training daily for a marathon.

Since we spoke in September of last year, my memory is a bit rusty. I think he was preparing for a 22km run in Montreal.

He mentioned about going for runs together, and I was like.. uh.. ok you run the first 20km and I’ll join for the last 2km. AHAHAHAHA.

A gave me the impression that he was really nice, independent, more of a listener type, hardcore, and kind of quiet.

I found out he was from Mauritius and he actually spoke French very fluently. Now, I’m someone who really likes languages and French is a very sexy language. *sigh* The French accent is so hot.

As a Canadian, French is actually one of our national languages. Sadly, despite the mandatory classes from Grade 4-9, I can’t communicate in French at all. I only know very basic vocabulary. I can’t even ask a question properly because I don’t know how the grammar structure work. *cries*

Ok, back on topic.

I really admire people who can do things that I can’t do. During our date, I tried to get A to teach me some French and roll the R (but I still fail). I had a list, and he helped me, but I can’t remember jack shit (please excuse my language). I feel like I really need someone to speak to me or be exposed in that environment in order to learn. Sigh.

A and I lived very very far apart from each other. So we decided to meet halfway, and met at Yonge and Finch.

We met at a café and I thought it was kind of cute how he had a hat on. I think he was trying to hide his hair or something (either it was too long or too messy?).

He was actually a lot more quiet in person than online. I wasn’t sure whether he was shy or he just didn’t want to talk too much.

But as a person who talks a lot, it didn’t bother me. AHAHAHAHA. We had a nice conversation and soon, it was dinner time.

I didn’t want to force A to eat with me, so I gave him the opportunity to leave. I said, “Do you need to go home? I know you have to wake up early for work.” (I always give guys a chance to leave if they want to. I know some people just stay for the sake of being polite.)

A had his chance to leave but decided to stay out, so we went somewhere nearby and had Korean food.

A’s family is in Montreal, and he mentioned driving there often to see them. It was pretty crazy because eventually I found out we have a mutual friend/acquaintance. Apparently, someone I know (a friend of a friend) was his neighbour back in Mauritius! What a small world.

Omg, this is getting too long. I’m not going to go into too many details. Anyway, we had a nice dinner. By the time we left, it was already 10 something. We met up around 6?? I am assuming he enjoyed it, or he would’ve left sooner than later. He had to wake up at 6:30am for work on a daily basis. *cries for A* END_OF_DOCUMENT_TOKEN_TO_BE_REPLACED

Disclaimer: This is from my own personal experience and may or may not reflect the experiences of others. I started using Hinge from August 30th until around mid Oct of 2019. 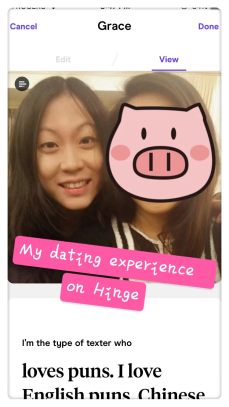 You can sign up an account using only your phone number. Hinge allows you to choose/upload 6 photos of yourself. It took me a while to choose 6 haha. My friends next to me were so impatient.

I had to choose 3 prompts for Hinge. Prompts are used as conversation starters. The guy/girl may comment on your prompt. However, they cannot have a conversation with you unless you accept/allow them to.

Here were my prompts:

I’m the type of texter who
loves puns. I love English puns, Chinese puns. As long as they are punny, go for it. XD

Together we can…
compose a song together! I loveeee music!!!

The secret to getting to know me is
read my blog. liveandlearn88.com

I like my prompts because I think it makes me more unique and it reflects me well. I didn’t want to be the typical “I like to eat, travel, and sleep” LOL (no offense if that’s what you like).

If you are confused and needs some help using Hinge, visit https://hingeapp.zendesk.com/hc/en-us/categories/360001659533-Getting-Started for more information

I’m told that guys on Hinge get to swipe approximately 5 people a day if they are a regular user. (I’m not sure if it’s the same for females).

Personally, I didn’t actually click like on anyone’s profiles. I only commented on one profile because I wanted to know what a dank meme was.

I didn’t actually have to initiate anything with anyone because I was getting likes every few minutes on the first day I created my profile. At first, I was open to all. But I had to make it super difficult because there were too many people and some guys were so old, they could be my dad. For instance, one guy was 64… uh…

As a result, I made it much harder for people to discover me since I put a deal breaker on age, no one with kids already, no drugs, and etc.

Hinge made me a preferred member for a month because they wanted to encourage me to use the app more. When you’re a preferred member, you can see everyone that has liked/commented on your profile. Otherwise, you would have to accept or reject one at a time before you can view the next person’s profile.

As a preferred member, you also get preferred preferences and you can customize it even more to fit what you are looking for.

The reason why I have to filter so hard is because there are just too many people. I cannot talk to everyone. Basically, I accepted those who read my blog LOL (I can tell based on their comments) and if they are into music.

There are definitely a lot of guys with potential, but I have limited time and energy. I can only focus on so many before I lose track of the names and get them all mixed up. I cannot talk to a hundred people. I know that a hundred likes doesn’t necessarily mean a hundred options. However, if I accepted and they messaged me, I didn’t want to ignore them. Hence, I just let them pile up.

So as you can tell, online dating has a lot to do with luck too.

END_OF_DOCUMENT_TOKEN_TO_BE_REPLACED

Long time no blog!! Don’t worry, I haven’t forgotten about you guys. 😛

Today I would like to share my experience on Coffee Meets Bagel. For those who don’t know, CMB is a free online dating app where you can meet other people from your city. I like this app because guys cannot message you unless it is a mutual like (meaning, they “liked” you and you “liked” them back).

In case you’re confused, here’s a picture I found on google: 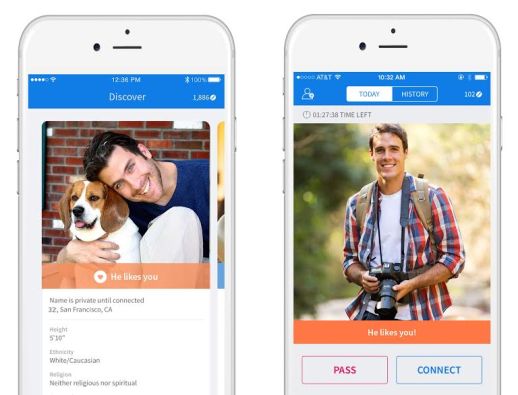 Anyhow, I’m not going to teach you how to use this application. If you are interested, I’m sure there are many tutorials online!

I’ve been using this app for approximately two weeks or so, and here are some things I have noticed:

Guys are tired of trying

I scrolled through some profiles and I could tell that some guys were tired of making so much effort. Under the column for “I appreciate when my date…..”, some wrote, “shows up”, “offers to split the bill.”, “takes initiative.”

At first, I thought it was just one or two bitter guys. But after using the app for two weeks, I realized I come across these types of profiles on a daily basis!!

So it appears that a lot of the guys had terrible experiences and had been stood up by dates in the past.

This is rather unfortunate because after so much disappointment, they don’t even want to try anymore. END_OF_DOCUMENT_TOKEN_TO_BE_REPLACED 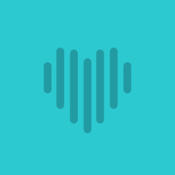 To celebrate breaking 500000 views on my blog, I decided to try something new. I downloaded my first ever dating app!! I found out about this app through Lisa. It is called Unveil and I think the concept is very interesting.

Basically, everyone’s pictures start off as blurry. The only way you can see what the person looks like is if you send voice messages back and forth. The more you talk, the more gets unveil.

Anyways, this is how you start.

My voice intro was actually very shitty but it was actually what I was thinking; hence I didn’t change it. This is what I said, “Hi, my name is Grace and I like inspirational things….and singing. *awkward 2 secs pause* What about you? *another awkward pause* I wanted to try this out because it seems like a very cool concept… and…we’ll see. *pause for one more sec*. That’s it.” [end]

I thought about changing it and making it sound more attractive. Or perhaps singing to “trap” some guys. But ultimately, I decided to leave it because I’d rather the person like me for my less-perfect version. I want to be real and not edit my thoughts.

Anyhow, one person did message me. We’ll call him S for stranger. The first message S sent me was, “Hey Grace. You said you like inspirational things. What’s your biggest inspiration and why?” END_OF_DOCUMENT_TOKEN_TO_BE_REPLACED